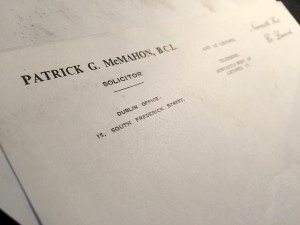 We are solicitors with over 50 years’ experience in providing legal services, incorporating a wide range of expertise. We are based in Newcastle West, Co Limerick but have clients around the country and act where you need us.

We represent clients in all courts and dispute resolution forums in Ireland, from the District Court to the High Court and the Commercial Court.

We provide practical advice and services focussed on getting the best results for you bearing in mind your legal situation, personal circumstances and desired outcome.

The firm was founded by Garry McMahon, son of the well known teacher and writer Bryan MacMahon of Listowel, Co Kerry. Garry was born in Cashel, Co Tipperary, the hometown of his mother Kitty and he trained there as a solicitor with his uncle, Donal T. Ryan, before opening his own practice at North Quay, Newcastle West. He quickly developed a significant client base in West Limerick and North Kerry and the firm became particularly known for transactions involving agricultural land and for personal injury claims, in relation to which Garry acted for injured parties and a number of insurance companies. He was a member of the Committee on Court Practice and Procedure which recommended, among other things, the establishment of the Commercial Court. 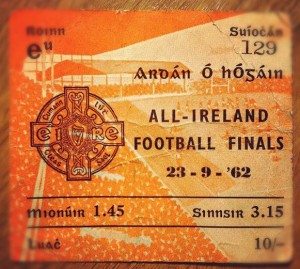 Garry was a well known sportsman and found particular acclaim playing football for Listowel Emmets and Kerry, with whom he earned two Senior All Ireland medals.

This morning Garry McMahon was the son of a famous father, this evening Bryan McMahon is the father of a famous son. (Micheal O Hehir, 1959 Munster Final, after Garry scored 2-2 in the first half of the game)

Garry retains the record for the fastest goal ever scored in an All-Ireland final: in 1962 when Kerry played Roscommon he punched the ball into the opposition net 34 seconds into play.

He was also a well known singer and composer of ballads. He was a regular feature at Comhaltas events and toured America with the organisation. In later years he composed music for two masses in Irish and recorded an album of his own music shortly before his death in 2008. Of those recordings perhaps the best known is The Land of the Gael.

Garry was an enthusiastic member and regular attendee at the West Limerick Singing Club which was established in 2002 and meets on the first Thursday of every month at the Ramble Inn in Abbeyfeale. The Club hosts an annual singing festival each October/November and, since its inception, have named it the Garry McMahon Singing Weekend. The weekend, now into its eight year, draws singers from around the country with a mix of singing sessions and workshops and an annual competition for a newly composed ballad.

Garry died in 2008, leaving a legacy of excellence in serving his clients.