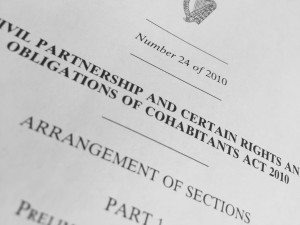 When the Civil Partnership and Certain Rights and Obligations of Cohabitants Act 2010 was introduced, most of the focus was on the first element of the Act: civil partnerships. With the passing of the marriage referendum it appears that the Government will in fact revoke legal provision for civil partnerships.

However, a significant part of the legislation provided for rights of cohabitants, a defined class of people who live together in an intimate and committed, yet unmarried, relationship. Previously, if such a relationship ended, whether through break-up or death, there was little legal protection for the people involved other than, perhaps, by launching complicated and uncertain equity actions.

The 2010 Act introduced a number of potential claims which a cohabitant can make against the other cohabitant. In particular a cohabitant might be entitled to maintenance or a share of assets of the other party, as can be sought in separation and divorce scenarios. The 2010 Act also provided a right to claim from the estate of a deceased cohabitant.

However, it is quite obvious from the wording of the 2010 Act that the rights of cohabitants to make claims are not as straightforward as the rights of spouses. Greater conditions are attached to such claims. For example, one first has to meet the definition of a “qualified cohabitant” and the fact of living together alone is not sufficient. One also has to establish financial dependency on the other cohabitant which arises out of the relationship and its termination. If one does surmount those hurdles the extent of the right might not be equivalent to that of a spouse; for example, a court must take into account the other duties of the cohabitant to provide for children or spouses.

Given that the 2010 Act was quite a novel introduction to Irish law published decisions have been eagerly awaited so that people can have a sense of what criteria a court will apply in deciding whether or not an individual applicant is entitled to claim relief at all and, if they can, to what extent they can claim relief. There were recent media reports of a decision by Judge Rosemary Horgan (President of the District Court but sitting as a judge of the Circuit Court) in which she awarded a cohabitant 10% of her former partner’s assets following separation.

More recently, Ms Justice Baker gave comprehensive consideration to a number of aspects of the 2010 Act in deciding a case (DC v. DR [2015] IEHC 309) where a cohabitant claimed from the estate of his deceased partner, with whom he lived until the time of her death. The deceased had not made a will but had left a document which appeared to indicate her wishes or the basis upon which she might have drafted her will. Baker J awarded her surviving partner 45%, largely in line with what the wishes of the deceased appeared to have been.

What the decision in DC v. DR demonstrates, and what has been anticipated, is that the individual facts of each particular case will have huge importance, even more so than other family law cases. Given the hurdles a claimant must surmount greater evidence of the nature of the relationship may be required, both to establish the fact that the parties were qualified cohabitants and to establish the extent to which an award should be made.

The implications of the 2010 Act are still not widely known by the public. It is important for unmarried couples to be aware of these crucial provisions:

If you have any questions about the rights of unmarried couples or require advice please contact us.