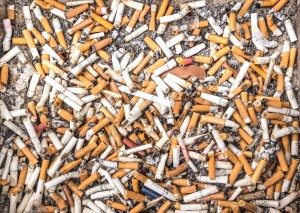 A new law introduced in 2014 provided for a ban on smoking in the presence of children while in a car but the ban will only take effect from 1 January 2016. According to Minister for Children James Reilly:

[N]early one in every five children between the ages of 10 and 17 years are exposed to toxic, carcinogenic smoke smoke in cars. Even if windows of the car are open the young person is not protected from the harmful effect of second hand smoke.

Anyone smoking in a car in the presence of children is guilty, including a smoker under 18. In addition, drivers have a responsibility to ensure no-one smokes in the presence of children so, if the smoker is not the driver, both the driver and smoker are guilty. The only defence the smoker has is a reasonable belief that the occupants of the car were 18 or over. A driver who was not smoking may have a defence if (s)he can prove that (s)he was unable to stop the smoker, for example because (s)he was driving the car at the time. The driver must make all reasonable efforts to prevent smoking. For example, if a driver notices a passenger smoking in a car while children are present the driver should pull over at the first safe opportunity to do so.

The offence is a fixed charge offence so failure to pay the fine within 28 will first result in it being increased. If the fine is not paid after 56 days the case will proceed to court.

The ban is aimed at protecting the health of children by avoiding second-hand smoke in small spaces. However, there are good road safety reasons for not smoking and driving, even when children are not in the car. While the Road Safety Authority has previously said it would not support a ban on smoking while driving, the AA lists smoking while driving as one of the most dangerous habits of drivers. Drivers should always be mindful of the general offences of dangerous driving and careless driving. Depending on the circumstances, smoking while driving could be an element in such an offence. The best advice is not to smoke while driving.